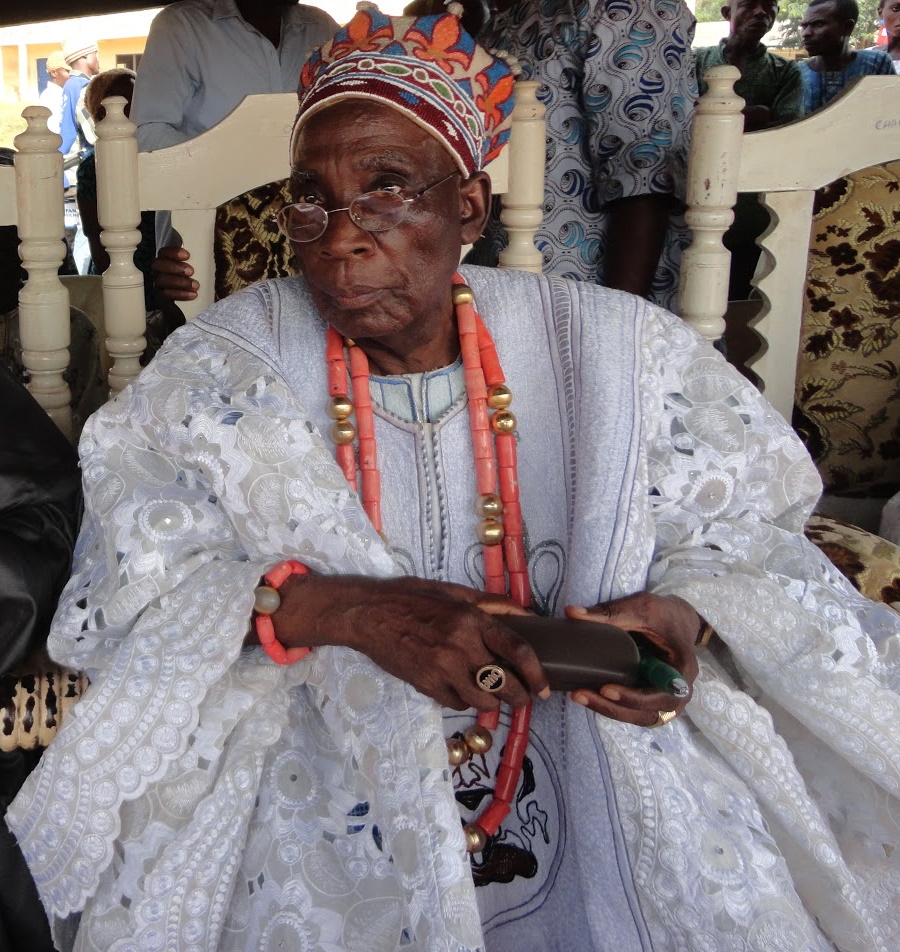 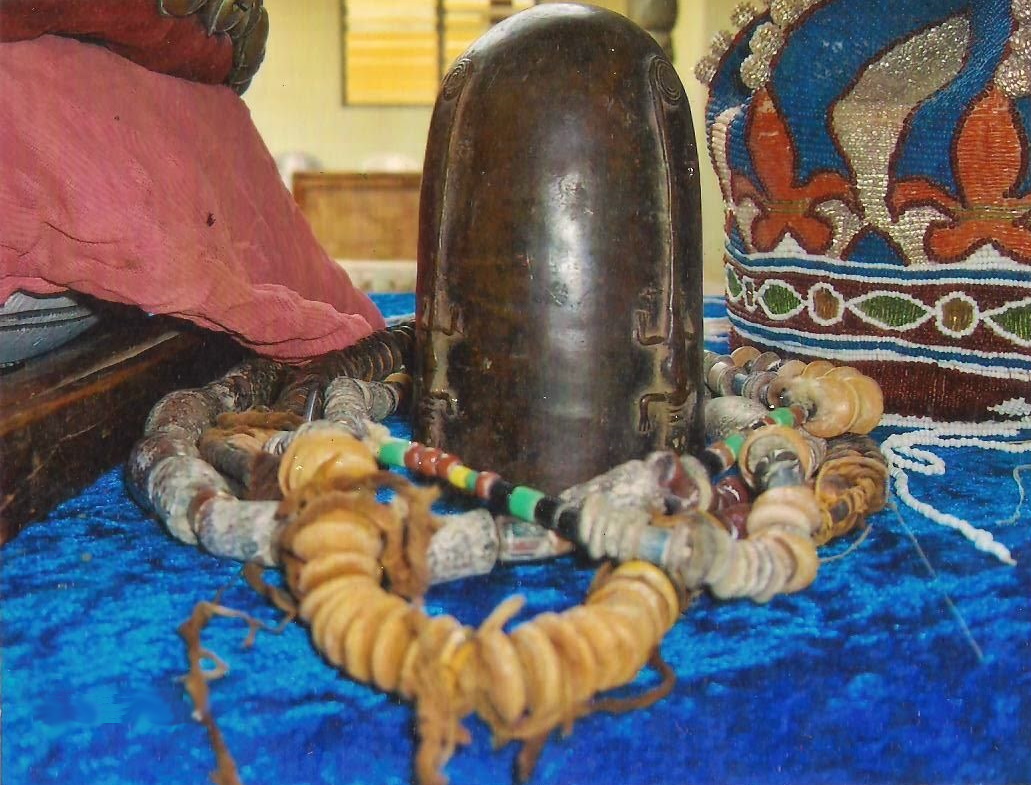 Idanre has been ruled by a monarchy that stretches back over many centuries. The current Owa of Idanre kingdom (2019), His Royal Majesty Oba Fredrick Adegunle Aroloye Arubiefin IV became the 26th Owa and paramount ruler of all Idanreland in September 1976, following the transition of his father, the 25th Owa, Oba Aladegbule Aroloye Arubiefin III.

Kabiyesi presides over an adminstrative structure that governs over 400 villages and settlements that comprise Idanre Kingdom.

A list of the previous kings including where available, brief highlights of their reigns follows below.

There are several versions of the history of the Idanre people, which unfortunately have a few variances as they are based on oral recitations handed down through the centuries.

One of the most enduring and seemingly closer to the truth, indicates that the revered founder of Idanre was Olofin Aremitan, who according to history was the younger brother of Oduduwa, the legendary founder of the Yoruba tribes in Nigeria.

Oduduwa and Olofin, along with many followers are thought to have migrated from ancient Upper Egypt, possibly between 2000 – 1500 BC and settled in the western part of Nigeria called Ile-Ife.

Olofin was a renowned warrior, whose military prowess contributed immensely to the security and safety of the Yoruba peoples during the reign of Oduduwa at Ile-Ife.

When Oduduwa died, a tussle ensued between his family members as to who would succeed him as the king of the Yorubas. Oduduwa’s son, Oranmiyan, emerged victorious and Olofin departed Ile-Ife with some of his followers to found a new settlement.

Olofin’s sojourn took him past some well-known enclaves eventually settling at Utaja, close to the foot of the hills of Idanre.

Although he founded Idanre, Olofin did not take up the formal title of King (Owa) of Idanreland.

Following Olofin’s decease, his most able lieutenant, Agboogun became the leader of the people and their eventual first King. Agboogun was the armourbearer of Olofin and his name indeed makes reference to this; “Agberu Ogun” means he who carries his master’s tools of war.

Agboogun sought to protect his people from invasion by surrounding enemies and decided to relocate his community from the foot of the hills to Oke-idanre, the top of the hills.  In those days, the new settlement was called, “Ufe Oke,” which loosely translates to ‘Ife atop the hills’, thus providing some connection to ancient Ile-Ife. One of Agboogun’s lieutenants was an explorer and hunter named Egunren and it was he who sought out the ideal location for the Idanre people to reside at Idanre Hills.

As Agboogun became increasingly old and frail, it became more difficult for him to handle the responsibilities of kingship and tensions between the seven heads of families began to emerge. The community decided it would be prudent to have a new King to replace Agboogun, a proposal with which he agreed. 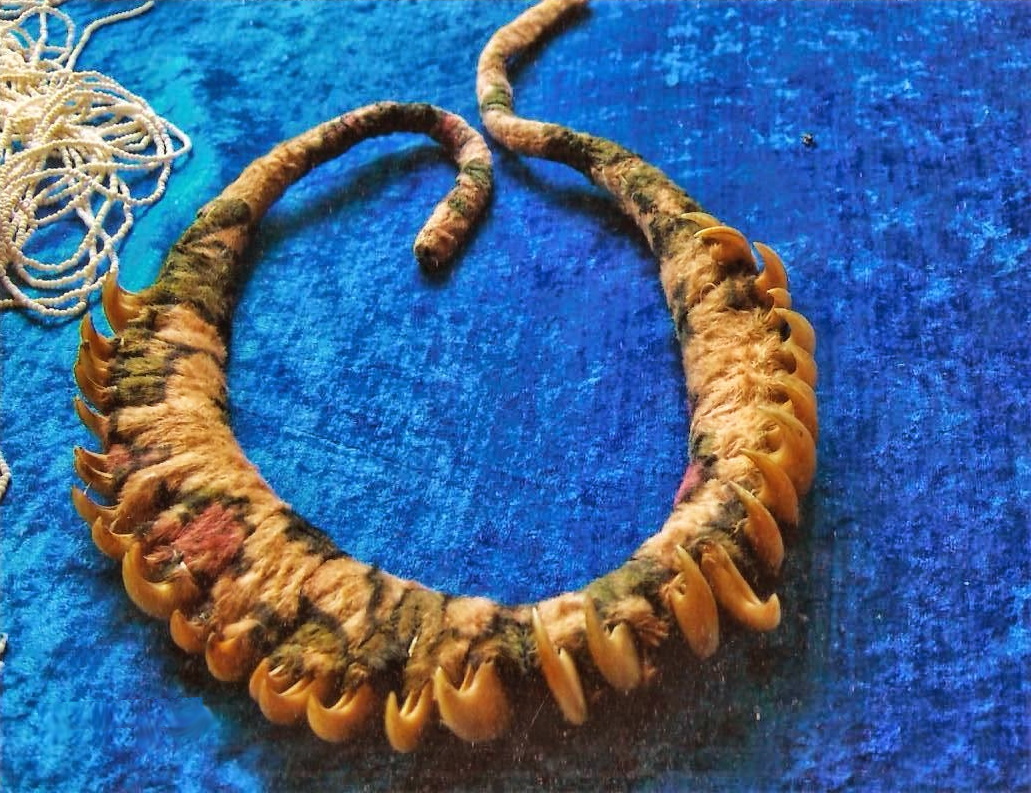 Part of the Regalia of the Owa of Idanre 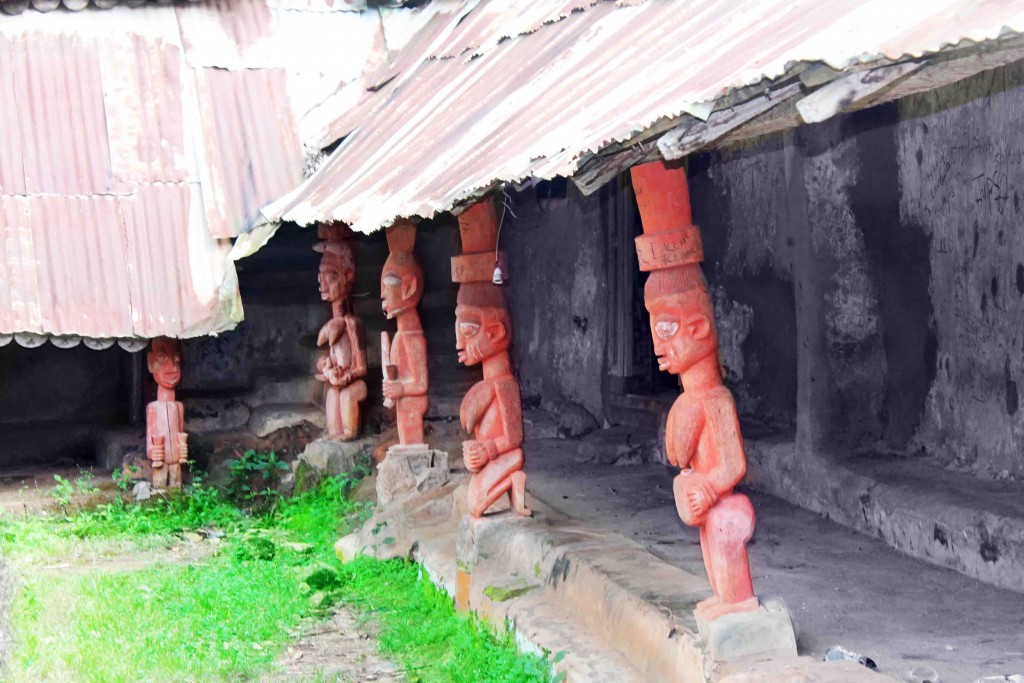 Carvings at the Ancient Royal Palace at Oke Idanre 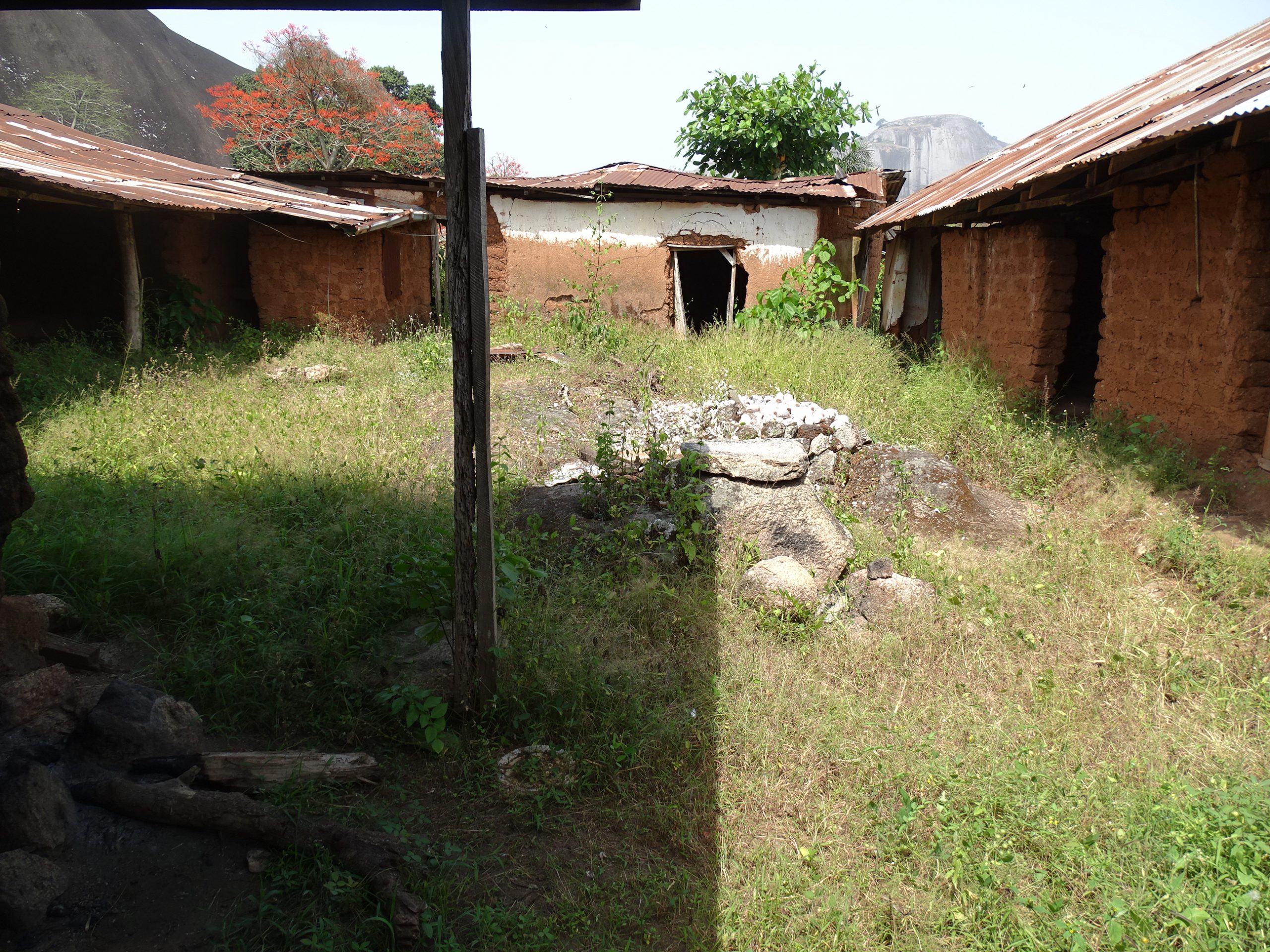 Idanre Hills - Courtyard of Settlement of Huts at Oke Idanre

Deliberations between the heads of the seven quarters and the leaders in the community resulted in Owa Baganju ascending to the kingship of Idanre. His emergence marked the first clear cut establishment of a royal lineage for Idanre. The heads of all the other seven families would henceforth be Heads of Quarters, whilst Owa Baganju’s descendants would be the paramount rulers of Idanreland.

Owa Agboogun abdicated the kingship and gave his daughter, Agbamudu in marriage to Owa Baganju, hence confirming his approval of the new monarchy arrangement.

Nevertheless, Baganju continued to honour Agboogun as his leader, especially during high feasts or the performance of the annual traditional Ije (Iden) festival when Baganju would wear the full regalia of office as King. He would go to Agboogun to pay homage, conduct some rites and receive blessings from him.

During the reign of Owa Baganju, Orosun, the beautiful lover of Olofin Aremitan returned to Ufe-Oke to resume her relationship with Olofin, only to find out that Olofin had passed away. Orosun remained in Ufe-Oke (which was later renamed Idanre) and eventually married Owa Baganju.

During the reign of Baganju, a new hereditary chieftaincy title called Mananre was created for the Okedo quarters. During his reign also, around the time of the annual Ije festival, a certain Laamogun attempted to steal the ancient crown of Oduduwa, which Olofin had brought from Ile-Ife and was handed down to the successive kings of Idanre. The attempt was thwarted, a crime for which Laamogun paid with his life.

When Owa Baganju died, he was laid to rest at Okedo, a street which later took up the appellation, “Ode Oba”, i.e. the street of the king.

The successor to Owa Baganju was Owa Beyoja. His name derived from his successes in fending off the incursions of the people of Oyo during the Eyo (Oyo) wars.

Legend records one of such encounters in which Owa Beyoja learned of the impending invasion by the famed Oyo army coming from Ile-Ife on horses. Beyoja instructed every able-bodied man in the Idanre community to produce as much palm wine as they could. The palm wine would be laced with poisons and placed in several strategic locations for their enemies. The Oyo warriors unsuspectingly drank the poisoned wines and many of them died.

Those who survived or avoided the poisoned drinks proceeded towards Idanre and attempted to fight their way to the top of Idanre Hills. On getting to a flat rock which came to be known afterwards as Okuta Eleyo, the Oyo warriors were ambushed by the well prepared Idanre warriors who decimated the rest of the Oyo army, leaving only a very few to escape to an enclave called Oba Ile. 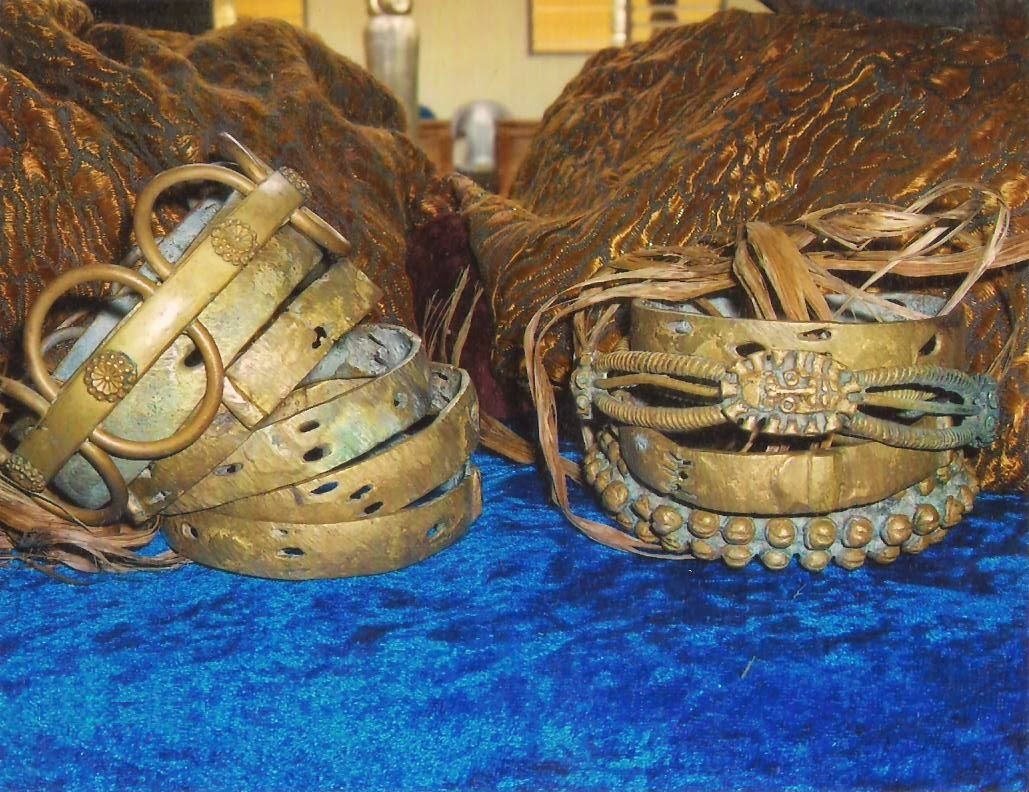 Part of the Royal Regalia of the Owa of Idanre 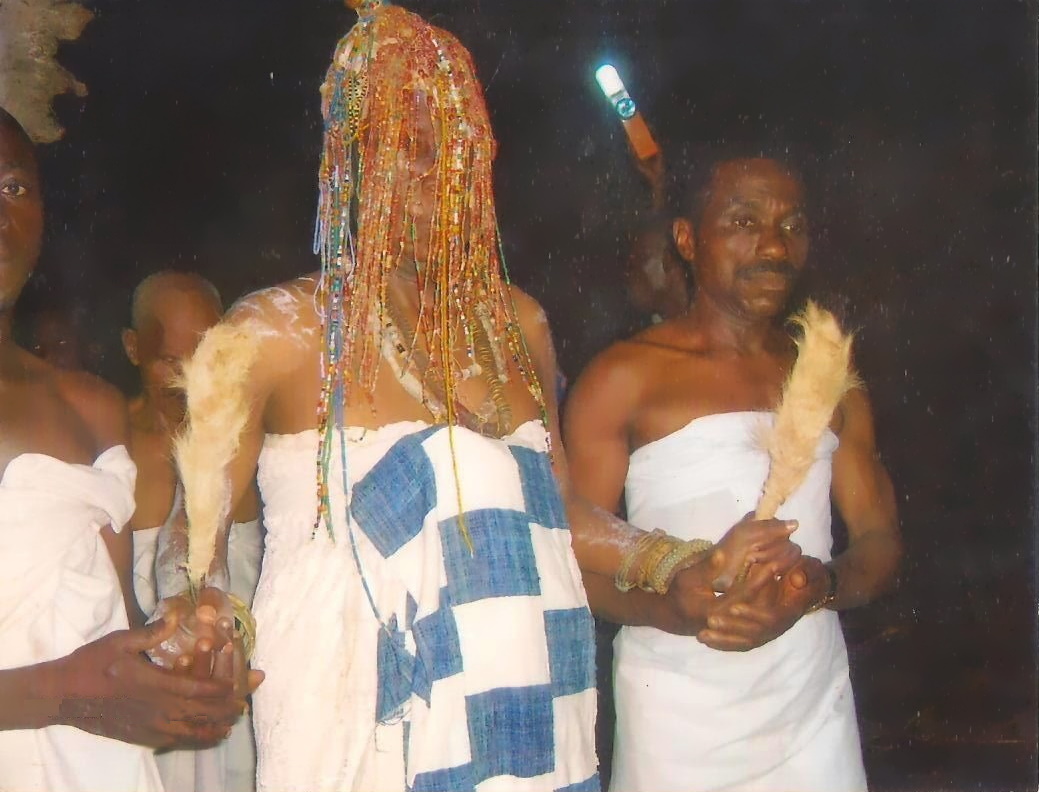 It was during the reign of Ogbogbomudu that a man known as Ojomu-Olumuse witnessed the practice of killing and eating bats at Use Ekiti. He discovered a cave close to Utaja where there are plenty of bats and initiated the practice of bat hunting in Idanre, which eventually evolved into a festival.

Another cave, originally named Uwo Jisun with a retinue of bats was discovered by chief Laja. The name of the cave was later changed to Uwo Owa. Together, these two caves form the locus of frenetic activity by the young men of Idanre during the annual Osu Ise Festival, usually held in February.

Ajula’de refers to his sword, reportedly given to him as a present from the Oba of Benin when he visited Benin as the first Oba of Idanre to do so. Supposedly, this Oba of Benin was his maternal brother.

He was driven from Idanre because of some malady, but was cured and returned to the throne and held power for many years before he died.

According to historians, traditional cloth making started at Idanre during Owa Orile’s reign.

Alade Market was founded during his reign.

During Owa Arowojoye’s reign, the people of Akure went to war against the people of Benin and Idanre became military allies with Benin to fight against Akure. 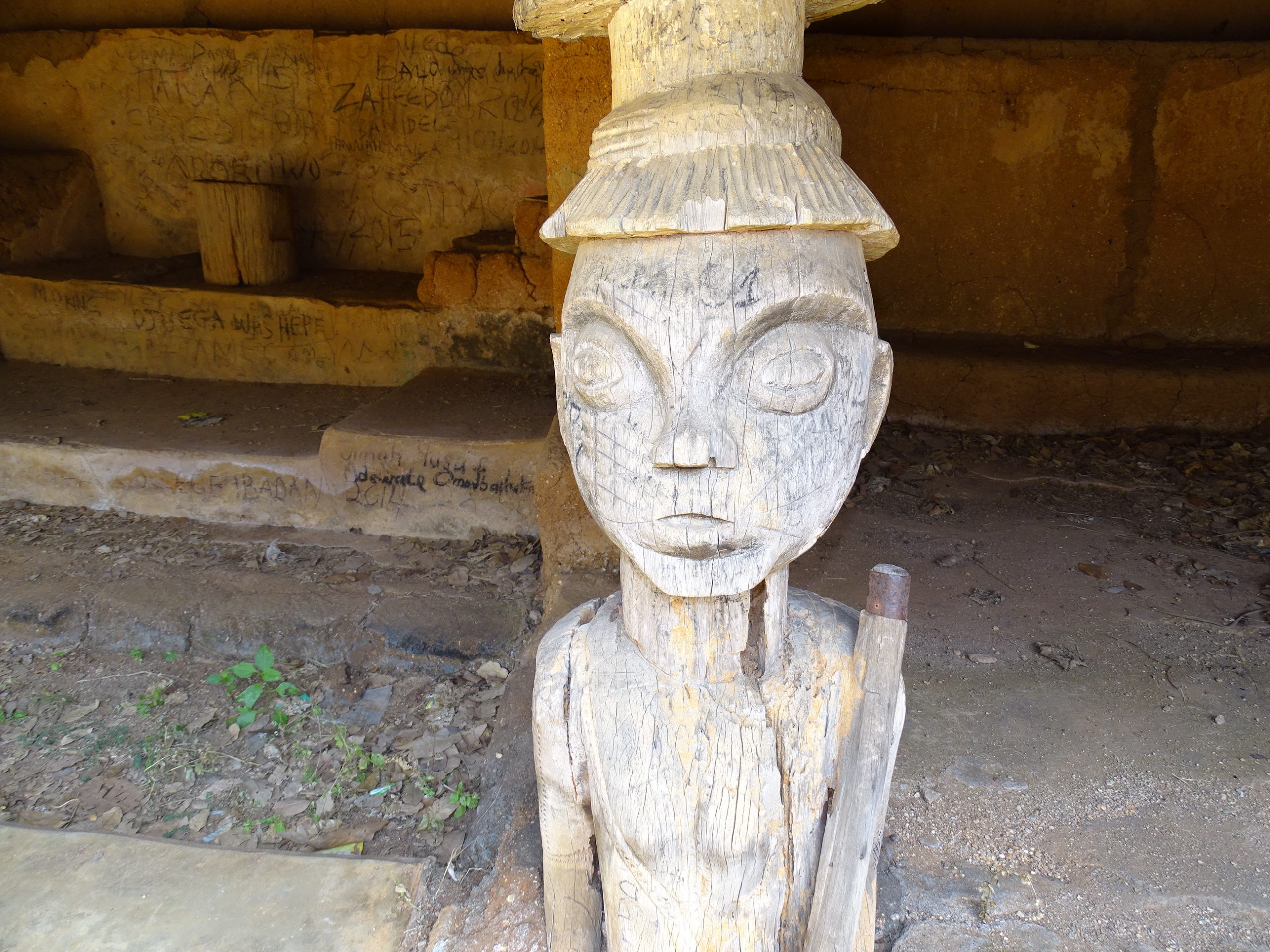 Carving of Royal Guardsman at the Ancient Palace - Oke Idanre 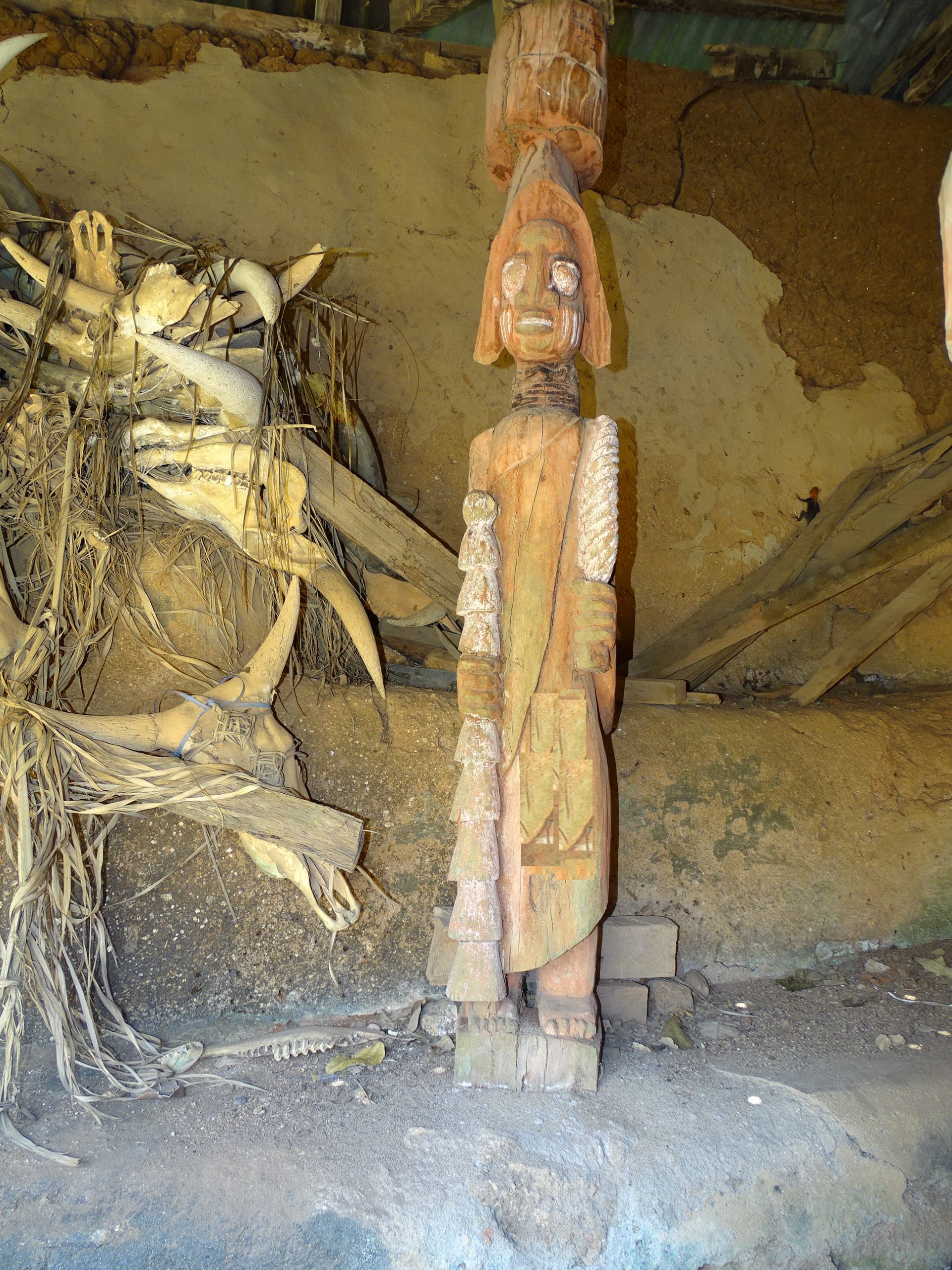 Owa Arubiefin I came to the throne in the 19th Century experiencing the incursion of the British colonialists into western Africa. He reigned until 1912 during which time, a signed a peace treaty with the United Kingdom, Christianity was introduced, and the site of the Anglican Mission at Oke Idanre was granted.

His reign witnessed sectarian conflict between the religionists and Christians, with the Christians suffering tremendous persecution.

Owa Gbolagbeye Arubiefin reigned for only seven from 1913 to 1919 with the last four years marred by severe ill-health.

The Native Court on the hills was established during his reign.

The father of the present king (at December 2019), Owa Aroleye Arubiefin III enjoyed a long reign from 1919 to 1976. It was during his reign that the settlement at Ilutitun (now called Alade) was established in 1930.

The indigenous peoples also descended from the old town of Oke Idanre down to the new town of Odode Idanre in 1934. Christianity expanded during his reign, schools were built, and the modernisation began in the two new settlements.

The main source for Idanre written history, the ‘Intelligence Report on Idanre District,’ which was compiled by T.B Bovell-Jones was also compiled during his reign. This document remains the only written records on old Idanre discovered so far apart from the Colonial dispatches by Thomas Gilbert Carter KCMG.

The Obaship institution with crown at Alade and Atosin began during his reign along with the expansion of the Oluship in other Idanre settlements.

Kabiyesi Arubiefin IV’s reign has experienced the gradual move of Idanre people from a primarily agrarian lifestyle to embracing the rapid advances in modern technology and its  socio-ecnomic impact on the new breed of global citizen. 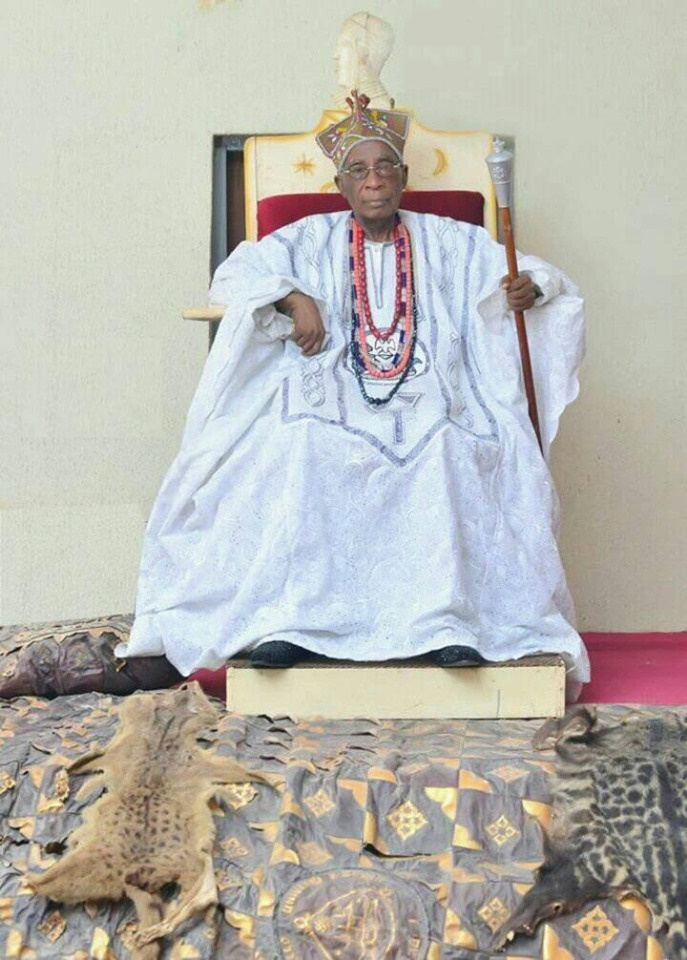 Note: We are happy to receive any factual corrections to the information presented above or anywhere on this website.

Kindly write to us at info@idanreland.com to advise us of any corrections. Thanks.